I was pointed in the direction of Adi Badenhorst by Melissa Morrow of Ponsonby Road Bistro fame. Adi’s mother is like her second mother, and she demanded that I import his wines! I have dutifully been doing this since 2010. Adi is a scoundrel, one to be loved. Always with a joke and a smile at the ready, one could easily not take him all that seriously. He is however one of the founding fathers of the Swartland Revolution – a group of winemakers whose intention was to put the wines from that forgotten region on the map. 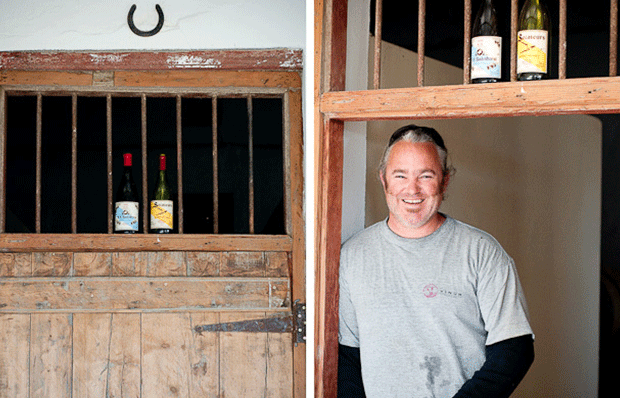 In the words of Eben Sadie, one of SA’s most revered winemakers, “Adi is an original. He is a blessing for sure.” I was lucky enough to participate in the last annual Revolution event in 2015. Three days of wine tastings, eating and dancing - serious but fun, a bit like Adi himself.

The large Swartland region (1h North of Cape Town) is now acknowledged as consistently producing some of the classiest wines in South Africa. Swartland is a gold mine of small, old vineyard plots scattered over many farms. Many of these are planted to bush vines – mainly of Southern French, Spanish and Portuguese grape varieties.

Adi grew up on Groot Constantia, South Africa’s oldest winery, where his grandfather was the general manager. He made his first wine at 13, and went on to work at cellars like Chateau Angelus in France and Wither Hills before spending nine years as winemaker at Stellenbosch Estate, Rustenberg.

In 2008, he and his cousin Hein bought Kalmoesfontein - a run-down farm with 28ha of dry-farmed bush vines, last farmed in the 1930s. They restored the neglected old cellar and farm and, using traditional techniques and biological farming practices, began producing wines under the name A.A Badenhorst Family Wines.

They now craft some of South Africa’s most internationally sought-after wines, and their distinctive, detailed vintage-style labels are instantly recognisable. They are possibly best-known for their delicious Secateurs Chenin Blanc, but the complex and elegant red and white ‘family’ blends, and the, perhaps most exciting, single vineyard offerings are what have put them on the world map. As Adi has described the single vineyard offerings, “these are wines without eyeshadow,” produced to reveal and respect the truth of each site.

Grapes for each wine are sourced from specific old-vine vineyards, some on the Badenhorst’s farm, others from neighbouring slopes and valleys. The names, most in Afrikaans, evoke images of their place: The range includes Dassiekop, Golden Slopes, Kelder, Klip Kop and Piet Bok se Bos Steen (all Chenin Blanc); Sout-van-die-aarde Palomino; Sk’windjiesvlei Tinta Barocca; Raaigras Grenache; Ramnasgras and Ringmuur Cinsaults.

Use the code ADIRULES to activate our offer of free shipping on any of Adi’s wines (valid to the end of September).