I had been importing wine from South Africa since 2003 and, through annual visits to the Cape Winelands and the great interweb, had become aware of Eben Sadie and his wines. I went so far as to visit the winery in Priorat in Spain which he had started and then handed over to his erstwhile business partner, Dominik Huber. Those wines, under the brand Terroir al Limit (the name tells a story in itself), while made from carignan and grenache grapes, tasted like top-end Burgundy. I was suitably impressed! 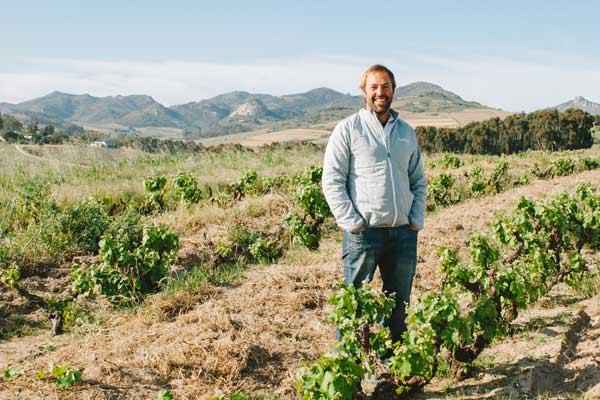 I reached out to The Sadie Family winery in late 2014, wishing to arrange a meeting, a winery visit and a tasting (I can be quite demanding). Delana, Eben’s sister, who holds the fort and is the gatekeeper at The Sadie Family, was quite forthright in advising me that the winery would be closed until January 4 2015 and a visit before then would not be possible. This is the only break they get in a year for Eben’s surfing quests.

Reluctant beginnings
On Eben’s first day back at work, I arrived with two wine-enthusiast South African friends in tow. They were relatively nervous as Eben Sadie and his wines are revered as royalty in South Africa. We arrived to be greeted by Delana and, finally, Eben arrived, demonstrably reluctant to engage with some visitors.

We sat in the large open-plan office above the winery, surrounded by hundrds of empty top-tier wine bottles from around the world. Delana, understanding her brother’s reluctance to engage with strangers, gently paved the way for Eben to start relaxing. He seemed reluctant at first to open any bottles to the Antipodean, but finally he did (corks of course). In South Africa, many wineries use the Zalto glassware, which is highly elegant, attractive and fragile.

Breaking the ice
Eben poured us a taste of his ‘other’ brand, Sequillo, which was soon to be deleted. This ‘entry-level’ wine was already making an impression, and we had not even arrived at the main act. Still not comfortable spending his first day back with these visitors, Eben swirled his Z glass rather forcefully and broke its stem. That was not all that was broken – the ice melted and we settled into a relaxed atmosphere, with Eben regaling us with his wide knowledge and interests, far exceeding the world of wine. After a couple of hours with Eben and Delana, including a cellar tour, we left with a deep understanding that this had been an exceptional visit at an exceptional place.

Later in 2015, I started importing the Sadie Family wines into New Zealand, and I am immensely proud to be afforded the opportunity to represent these wines. While Eben would never be out to gain glory through awards or point scores for his wines, he was chosen as the Institute of Master of Wine winemaker of the year a few years ago, and continually and consistently, his wines gain scores in the high 90s from all of the world’s top wine critics.

A unique perspective
I have been to visit Swartland and Eben and Delana a few times now. On the last occasion, I sat with Eben for four hours in his newly-built home. I spoke (interjected) for perhaps 10 minutes of those hours and never felt that I needed to be heard. Here is a quote from Eben that explains the man’s perspective a little more:

“We’ve got to farm incredibly conservatively this year. It’s like when you run a marathon, the idea is that you’ve had all the training, but you must also be in the state of mind, and must also have the physique, and you must have the reserves. But, for the vines this year, it’s gonna be like running the marathon on a serious hangover with a baby on the back.”

For further reading on Eben and his wines, I recommend this article by Daléne Fourie of Port 2 Port in South Africa. She has more patience than I and a beautiful way of weaving words into a story.