Many of us in the wine world have been unaware that an Aucklander is making a significant impact on the US winemaking scene from a remote vineyard in the Santa Barbara Highlands of California.

Angela Osborne was named by the San Francisco Chronicle as one of ten winemakers to watch in 2015, representing ‘the daring, questioning spirit that exemplifies the best of our current wine culture’. Wine Enthusiast picked her amongst their Top 40 under 40 Tastemakers in the same year, and the very latest issue of the esteemed Food & Wine magazine places her at the top of their list of iconoclasts ‘crafting rule-breaking wines’ across the globe.

To others, Angela is quite simply recognised as the grenache guru. And, thanks to an introduction from our good friends at Ponsonby Road Bistro, very soon a selection of her ‘A Tribute to Grace’ single vineyard wines that have earned a cult following in the US, will be available in New Zealand as part of the Planet Wine portfolio. We can’t wait. 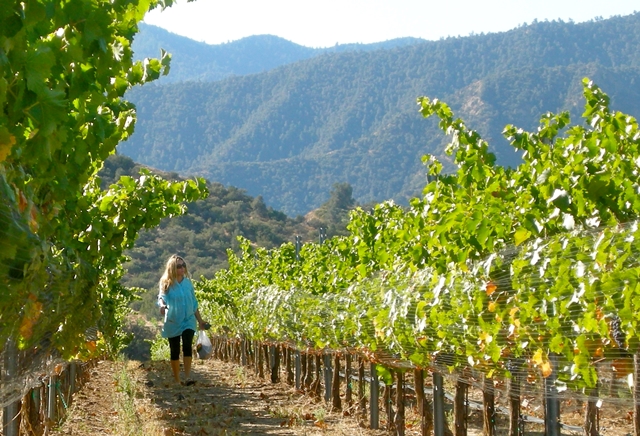 So, how did a Shore-raised film school graduate end up making wine under her own label high in the Sierra Madre mountains? Well, it was during her Auckland Uni days that Angela’s real interest in wine began, working shifts between lectures at Point Wines in Northcote Point, and a couple of evenings a week at Caro’s. “I think I got the job at Point Wines because I could pronounce gewürztraminer properly, having spent a gap year as an exchange student in Germany!”

A management role at the store followed when she finished film school, but the desire to chase her documentary-making dream beckoned and she soon started volunteering on film sets. It was just before leaving Point Wines that fate intervened with a visit from legendary winemaker Brent Marris, who recognised Angela’s passion for wine and didn’t want to see her lost to the industry. He suggested she try a harvest overseas and put her in touch with a friend, fellow Kiwi winemaker Nick Goldschmidt, in Sonoma County.

The choice came down to a job as a runner on a new TV police drama, or a season at Simi Winery. Wine won out, and in 2002 she spent three months in the massive facility scrubbing, filling, emptying and fixing holes in barrels as a member of a solely female Hispanic cellar crew. “I couldn’t speak a lick of Spanish, but I loved every minute of it! I knew then that is was what I wanted to do, to make wine.”

It was during her next internship at a boutique family-owned winery, also facilitated by Nick, that the allure of grenache first took its hold on her, and she knew then it was not just wine, but more specifically grenache she wanted to make.

Angela recognised though, that to make wine, first she needed to know more about how to sell it, and a stint at a wine shop in San Diego (which was also closer to her American dad) followed, then a move to London to take on the wholesale wine world. That’s where the Ponsonby Road Bistro connection was made, with head chef Sarah Conway who at the time owned a little restaurant in Islington called Fig.

Working as a wine rep Monday to Friday, Angela helped out at Fig on Saturday mornings. “I called myself her sous chef, which was funny as the kitchen consisted of the chef, the dishwasher and me. I mostly grated apples for Bircher muesli and asked Sarah to hand me a chai with an espresso shot across the pass. She named it Hippy with a Sling Shot. We had lots of fun.”

After two and a half years in London, the movie Sideways literally lured her back to the big skies of California in 2006, and to WineSellar & Brasserie in San Diego. Soon after her return, the store held a grenache tasting for Thanksgiving, and all the winemakers happened to be from the Santa Barbara Highlands Vineyard. “It was like the stars aligned!”

One of them offered Angela the chance to piggyback on his grape contract at the sustainably-managed vineyard (North America’s second highest for grenache, at an elevation of 1000m) and to make her wine in his winery. And so in 2007 A Tribute to Grace was born, with a single 100% grenache wine made from her first harvest.

“Grenache can be as ethereal as it is powerful, and, when made with balance, delivers the sort of expression that makes the world slow down. My aim is to meet that goal with every vintage, like the very first grenache I tried allowed for me. It’s the perfect balance between yin and yang, but erring ever so slightly on the feminine, the yin.”

A Tribute to Grace’s portfolio has since expanded to several grenaches, plus a little rosé in some vintages, now also sourced from a handful of other vineyards in the region, and Angela is about to pick her tenth harvest at the beautiful desert scape of Santa Barbara. 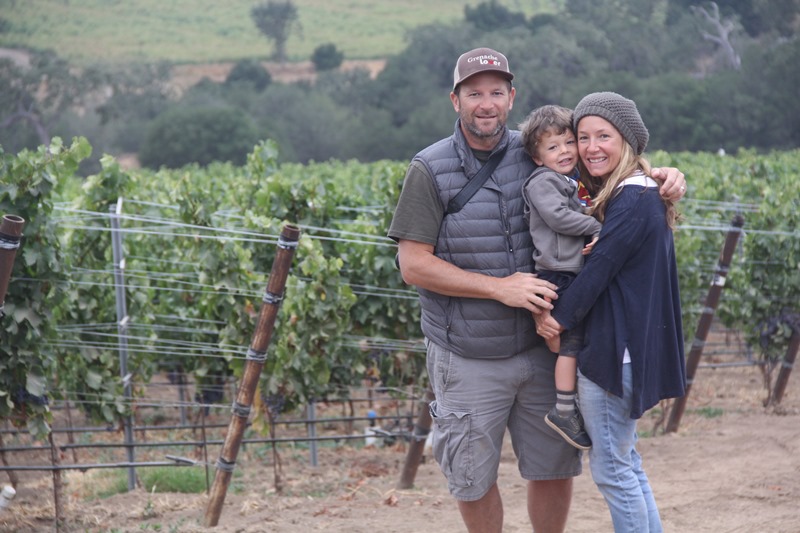 Her and English husband Jason’s family has also grown to include two sons, Bodhi (3) and Marlin (1), and their Mexican coyote Archie, who all live on a 600 acre ranch in northern Santa Barbara County near the small town of Los Alamos. “From our house we only see rolling hills and birds of prey and the occasional bob cat. It’s very, very peaceful.”

The talk of yin and yang comes naturally to Angela, as does her approach to winemaking. As Wine Enthusiast puts it: “While some pay lip service to natural winemaking, Osborne … embodies it. She foot-treads grapes to the sounds of yogic chanting and racks according to the cycles of the moon.” 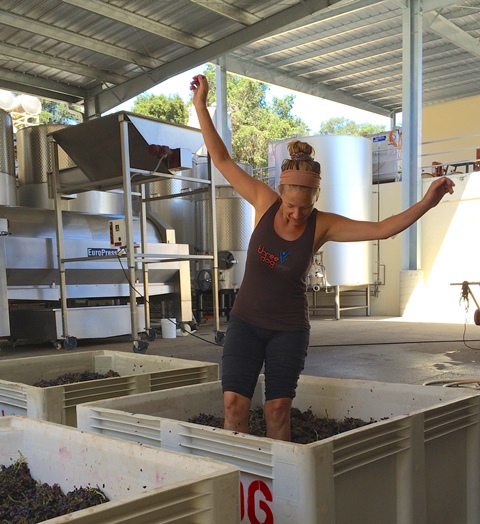 Angela acknowledges that, to some, that places her in the ‘earth mother, yogi, shanti-shanti camp’, but it’s really critical to her that in order to let the true graceful expression of the grape speak, you have to be very delicate and mindful with every part of making it.

The ‘Grace’ in the label’s name (Angela admits that the term features nine times on each bottle, including the cork) is not only about elegance. In fact the true inspiration behind the name was Angela’s grandmother, Grace. “She defined the attribute every day of her 91 years. Grenache is to me the most graceful of all grapes, so very much like Nana. And all the things I love most …”

Given the relatively small volumes of production, an exclusive mailing list of supporters get the first chance at each vintage of A Tribute to Grace, but the wines have also found their way onto influential wine lists from New York’s Eleven Madison Park to Stockholm’s Ekstedt.

In New Zealand we’ll be making Angela’s wines available to customers direct from the Planet Wine website, and sharing them with a small handful of restaurants and retailers.

For those who are already A Tribute to Grace fans, you’ll be happy to learn that it’s very much part of Angela’s and Jason’s plan (or at least their dream at this stage) to acquire a vineyard back in New Zealand. “We talk about it every day. We have our hearts set on the Tuki Tuki valley in Hawke’s Bay, and recently found a property that looks so very perfect. We’re hoping to get down there as soon as harvest is finished and see it for ourselves. For now, we look at it every day online.”

“The dream is to plant a few acres to chenin and, hopefully, grenache, and to split our time between New Zealand and the US. The home property would combine viticulture and a healing retreat, and our Cali life would stay dedicated to Grenache. A big dream! My Mum taught me to do that very well.”

In the meantime, if you'd like to put your name down for some of the three Graces we’re importing initially, email Martin on m@planetwine.co.nz. But hurry, allocations are tight and we’ll be delivering on a first come first serve basis when our consignment arrives in October.