Kereru not the only local flavour to this brewer's craft beers

At the centre of Wellington’s burgeoning craft beer industry is the Kereru Brewing Company, a thriving business whose owners want their fresh natural beers to celebrate the unique qualities and flavours of their adopted country. 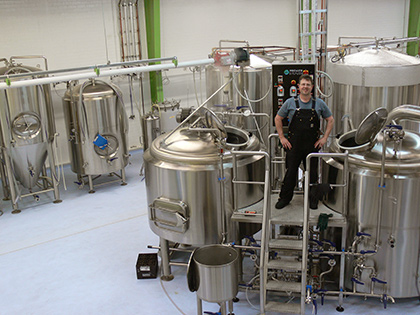 Chris Mills, a native of Boston USA, first got a taste for brewing at age five when his mother taught him to make root beer. He had already been a committed hobby brewer for a couple of decades when, in 2010, eight years after settling in New Zealand, he and wife Natasha Dahlberg decided to turn their rumpus room and garage into a commercial nano-brewery. They named the fledgling business after the wood pigeons so prolific in their Silverstream back garden.

Demand for their hand-crafted beers soon outgrew the 50 litre capacity of their first unit, and two years ago, Chris and Natasha custom-built their present 1,800 litre microbrewery within the walls of a disused factory building in Upper Hut. Their licence now allows them to provide brewery tours and sales and their beers are also distributed countrywide (Planet Wine is their exclusive agent north of Taupo).

And while Kereru crafts British and European-style beers, that’s virtually the only international thing about them (apart from their owners of course). Chris strives to use as many top-quality New Zealand-grown ingredients as possible. And we’re not just talking Gladfield malts and local hops. Their Karengose German-style sour beer is made with native edible seaweed karengo, the Golden Ale with pohutukawa honey, and the brown ale with kumara.

Local sometimes means literally ‘in the neighbourhood’. Faced with the challenge of toasting large amounts of coconut to flavour his For Great Justice porter, Chris turned to nearby friend Chris Chevalier, who happened to own a wood-fired pizza oven. Custom-built with lava rock from Mt Ruapehu and stones from the Hutt River, the manuka wood used to fuel the oven provided a further dimension of flavour. All of which add up to an award-winning beer. The FGJ porter took out a silver medal in the flavoured and aged styles category at the Brewers Guild of New Zealand awards.

The Kereru Brewing Company is no stranger to that sort of recognition. The FGJ Coconut Porter won the Icy Wingsz People’s Choice in 2015 and came out tops in the craft beer taste-off at the same event in 2014. Their Imperial Nibs won People’s Choice at SOBA 2015. Further afield, the Karengose Salty Seaweed Ale took a silver medal in the 2015 Australian International Beer Awards and the FGJ, again, a bronze at this year’s Dublin Craft Beer Awards.

Chris and Natasha have a business background in graphic design, which means they create Kereru’s distinctive, often whimsical, bottle labels themselves, a talent that was recognised with a gold at the 2015 Pride in Print awards. Such is the interest in the labels that they make them available for sale separately to collectors. They also offer the service of specifically tailoring labels for customers wanting a unique beer for special occasions.

In addition to the flavoured beers, on the more traditional end, the Kereru range also includes two pale ales (one a bitter and the other an IPA), a stout and a strong Belgian-style Trippel. All the beers are vegan and free of any chemical preservatives (hops, the low pH of beer and alcohol all do that job naturally.)

Whether traditional or flavoured, Chris is a firm believer that beers can be matched as successfully with food as wine is, and without any of the hard and fast rules. This was proved at a beer enthusiasts’ event in Wellington last year when respected restaurateur and culinary director of Beervana, Martin Bosley, produced one of the favourite matches of the night – dense chocolate cake with Kereru's FGJ Coconut Porter.

If this has whet your appetite to explore the unique flavours of the Kereru range,  click here to take advantage of this special deal...