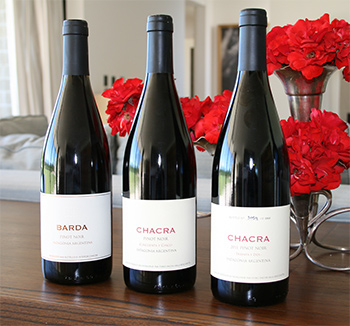 In a wide glacial valley stretching 500km along the banks of the Rio Negro River in a remote region of Argentina lies a patchwork of unique vineyards. Surrounded by desert and irrigated by snow melt from the distant Andes mountains, this oasis produces a range of wines that is setting the benchmark in its country, not for malbec as we might expect, but for pinot noir.

But the story of Bodega Chacra begins in New York in 2002, with a maverick Italian, his cousin and a Dane. Piero Incisa della Rochetta was in NYC on business for his family, the renowned dynasty behind the globally successful Tenuta San Guido and the legendary 'Super Tuscan' Sassicaia wines. Over dinner with his cousin, Countess Noemi Marone Cinzano and her Danish winemaker partner Hans Vinding-Diers, a bottle of pinot noir was opened. A Patagonian pinot noir. And so began an obsession.

"I fell in love with the DNA of that wine", says Piero. "It was not so much that particular wine, but the potential I could sense in it."

Noemi and Hans had developed a malbec vineyard in the same Rio Negro valley the wine came from, 1000km south of Buenos Aires. With the entrancing pinot still on his palate a couple of months later, Piero persuaded the couple to let him visit and help out with their harvest. On weekends he would scour the surrounding area on the lookout for his own vineyard with which to launch a dream – to produce world-class pinot noir from this uncharted territory.

In 2004 Piero found his piece of land – an abandoned property with gnarled pinot noir vines planted on their own rootstock in 1932. And so Chacra (small farm in Spanish) was born. A few years later he added two more vineyards: one planted in 1955 and the other in 1967. The wines Treinta y Dos and Cincuenta y Cinco are named after two of these properties. 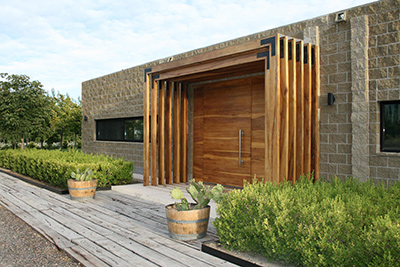 On the ridge (Barda in Spanish) of the oldest vineyard is a considerably younger 10-acre plot that contributes fruit to the wine named after it, blended with declassified grapes from the primary vineyards.

The region's aridity, coupled with the natural barrier of the surrounding desert, results in a complete absence of phylloxera and vine diseases. The constant winds that blow through the valley also help to keep pests away. And the pristine air is pollution-free, creating a luminosity and purity of sunlight European winemakers can only dream of.

The seasons in Patagonia are precisely defined, with hot summers, cold winters and mild springs and autumns, a dependable climate that creates a consistency of wine from vintage to vintage.

Chacra's gravity-flow winery building was erected on the original 1932 site and Hans (or el Vikingo loco as Piero calls him) was brought on board as consulting oenologist from the first vintages. Elegantly simple, the sandstone structure is in perfect harmony with its desert surroundings. Its maximum capacity of 100,000 bottles per vintage is tailored for handcrafted production, with no mechanisation used at any stage of the process.

Grapes are collected manually into small boxes to prevent bruising, and refrigerated to preserve the freshness of their fruit. They are then hand de-stemmed and sorted before being placed whole, without crushing, into cement tanks for fermentation. Once this stage is complete, the wine is transferred off the skins into small French oak barrels in the gentlest manner possible, by gravity, without pressing or filtration, and remains undisturbed on its lees for at least twelve months. Bottling is completed without fining or filtration.

The objective of all of this, according to Piero, is for the oak, the fruit and the nuances of the soil to marry perfectly so that influence of the wood is almost imperceptible in the wine, and the vine and ‘terroir’ are expressed to their fullest.

The oldest vines on Chacra produce small bunches of ultra-concentrated berries that give a particular intensity to the single vineyard wines and have won them worlwide acclaim. But it is the second-tier blended Barda that has been attracting the attention of some of the world’s top critics of late.

Naming it in the top 50 best-value picks globally for 2014 (from nearly 5,000 wines tasted), Decanter magazine had this to say about the Barda 2013: “Pinot Noir is not a grape usually associated with Argentina but this bodega makes some of the best in the new world, especially at this price level. Beautiful purity of plum and berry aromas, and spice. The palate is silky smooth with lively red fruit characters and firm tannins.”

The wine scored over 90 points from both Tim Aitkin and James Suckling, the latter saying of all Chacra’s Pinot Noirs after a recent tasting trip to the region: “… the purity and energy of Incisa's Pinots are persuasive that Patagonia is a Garden of Eden for vines and making wines.”

The Barda 2013 impressed even the renowned Jancis Robinson, who gave it 17, which she admitted was a 'skyward' score for her Burgundian palate, and thought it particularly good value at its price.

"The nose has a convincing earthiness about it. The palate began with pinot's trademark sweet fruit but this soon gave way to flirtatious lift and delicacy (not common in Argentine wine) with real refreshment value but not a hint of leanness. It's not all like any other pinot noir-based wine I can recall but I particularly liked the way it finished dry but not drying" she said.

To provide you with a physical insight into the magical produce of this ground-breaking Patagonian winery, we are offering a newsletter special until the end of August on the Barda 2013 and its older siblings.