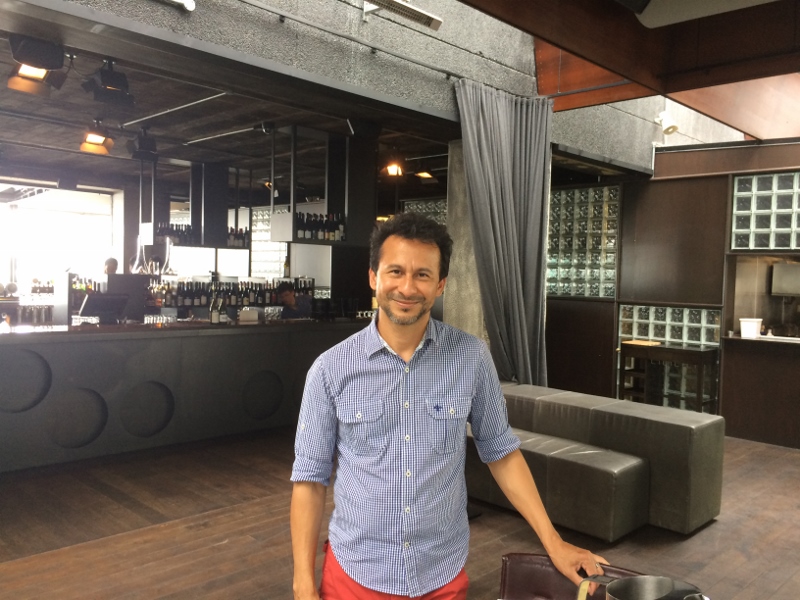 Dynamic sommelier at Britomart’s Ostro and Seafarers Members’ Club, Edmundo Farrera, had early aspirations to study hospitality, but his Mexican mother wasn’t keen, and his first job ended up being on an oil rig in the Gulf of Mexico.

Despite getting involved in politics as the rig’s representative, he knew it wasn’t his destiny and on shore leave one day, he didn’t hesitate when he was offered a position in a bar run by a friend that he was drinking at. In fact he started on the spot, before even handing in notice on the rig.

Wine had always interested him. “In my family I was always the one to select the wine.”

As his career progressed rapidly from there, Edmundo became involved with all three families that held influence in the industry in that part of Mexico. “It was a very good foundation, and I learnt skills I still use 20 years later.”

It also became clear that his passion for wine and for looking after people was going to take him far. Customers from New York tried to persuade him that he’d do well in Manhattan, but it was London that finally beckoned.

He applied for a job as duty manager at the Michelin star modern Cantonese restaurant Hakkasan, but was instead invited to become a sommelier. “Once again my fate was decided by someone else.”

Edmundo may be a self-taught sommelier, but the opportunity for knowledge and training at a prestigious venue such as this was vast. “We would taste up to 100 different wines in a day.” He also credits his first sommelier boss there as a huge inspiration. “I learnt the whole spectrum from him.”

His next growth opportunity came in 2006, at the hip Pan Asian restaurant and night club Tamarai, working with renowned Master of Wine Tim Atkin. “There I learnt to work with spices, which, being Mexican, really suited me. Tim also taught me how best to structure a wine list, something I have been using ever since.”

He was one of the first non-French sommeliers to make a mark in London (certainly the first to work for Alain Ducasse, which he did at Spoon at the Sanderson). “You’re always going to have that little Frenchman who hates you, but if I can put up with Mexicans, I can handle the French.”

His decade in the city also included a stint with Lisbon-born Michelin starred chef Nuno Mendez at Viajante, rising to the challenge of finding the perfect wines to match to his molecular delights.

Edmundo’s time in London was cut short by the ailing health of his mother and he and his then girlfriend Anna, a Kiwi, (the couple is now married with an 18 month old child) headed back to Edmundo’s homeland. “Anna loved it, learning the Spanish language and cooking, but I found it really hard to readjust, there was no intellectual challenge for me.”

So, with his mother’s blessing, when Anna was offered a great job in New Zealand, they headed out this way. His experience and the list of top London restaurants on his résumé meant he had a good choice of opportunities, but a love of seafood and the mutual connection he and chef Shane Yardley had with Alain Ducasse made him choose the Hilton.

Next up was Andiamo, where he increased the European influence of the wine list dramatically. “People in Herne Bay are so well travelled, they like to try wines from different places.”

He also introduced many more wines by the glass, 30 in fact, a practice he has kept up at Ostro. “We should be able to give you an amazing wine without expecting you to open a whole bottle”

It took him eight months to finesse and be happy with the wine list at Ostro. Knowing he had to cater not only for the restaurant, but also the Seafarers Members’ Club, he looked to places like Soho’s Milk & Honey for inspiration.

“I like to go wild with a wine list, and then tone it down from there. I like to have a couple of eccentric wines on the list – wildcards – but we need to keep the majority of wines in the mainstream.” Long-held advice from his father in law guides this decision. “He said it’s good to be ahead of the game, but not so far ahead that no-one knows what you are talking about.”

After that fascinating introduction to his background, we asked Edmundo to tell us a bit more about what makes the wine experience at Ostro – which he describes as a busy brasserie with a Kiwi soul – so special, and about his relationship with Planet Wine.

Having plenty of wines by the glass, and also covering all tastes and price points. But a lot of the success lies in having well-trained staff to guide customers through the list. At Ostro, we’ve initiated weekly training sessions where staff try wines and discuss them, learn new vocabulary, varietals and regions, meet winemakers and suppliers, visit wineries.

What is your current favourite wine and food match?

We’re loving a Sicilian wine, Girolamo Russo “A Rina”, made from nerello mascalese. It’s from what is considered the Burgundy of Italy, and is textural and quite herbal, you can really ‘chew’ on it. So it’s an excellent match for lamb and other red meat, but also goes really well with fish.

Can we ask you to match two wines supplied by Planet Wine to two dishes on Ostro’s menu?

The Albariño from Terres Gauda in Spain (which I urged Martin to start importing, having sold it with Alain Ducasse in London) with any seafood on the menu – albariño and seafood, no surprises there. Even riesling drinkers are surprised by it!

The Meerlust Red from Stellenbosch also over-delivers, it’s a true Bordeaux blend. And while it’s obviously a good match for red meat, with that merlot in there, it also goes beautifully with our seafood soup. These are the types of wines we call ‘wine champions’.

Which are currently the most popular drinks at the restaurant?

Prosecco is big at the moment, in fact we get through so much of it, a supplier asked if we bathe in it! Sangria has been very popular this summer, and also negronis and our espresso martini on tap.

How did your relationship with Martin and Planet Wine begin?

He wandered in one day while I was at Andiamo with a whole load of samples, which we tried there and then. I liked several, but told him I was looking for more ‘eccentric’ wines at the time. He went away and came back with so many choices, he just nailed it! We became firm friends from there, we’ve even played football together. When business turns into friendship, you can’t beat that.

What is it that you appreciate about Planet Wine as a supplier?

He’s a good listener, and he never shows you wines that are not suited to your list or restaurant. He’s shared wines with me that aren’t even in his portfolio yet, and welcomes input before the wines even reach this country.

Which wines/regions are currently under-represented in NZ (and could be an opportunity for Planet Wine)?

Definitely the more expensive German-style vintage rieslings, and I’ve got a few Mexican wines I want to share with Martin over a Mexican barbecue one day soon …