Some say he has changed the face of South African wine. Others describe him as a reluctant guru, and his wines as the holy grails for wine aficionados. But everyone agrees Eben Sadie is one of the great visionaries in the new generation of South African winemakers. To mark the arrival in New Zealand of our very first consignment from the Sadie Family in Swartland, we introduce you to the man and his wines.

I’d been hearing in wine circles for some time about the ground-breaking work Eben Sadie had been doing, including his involvement with Terroir al Limit in Priorat, Spain (which I visited this year). Keen to find out more for myself about this enigmatic winemaker and his plans for New Zealand, I contacted him in late 2014 to set up a meeting as soon as the family returned from holidaying (and surfing, Eben’s other great love) on the coast with their children.

I’d been told Eben rarely accepted meetings, but at ours he was generous with his time, showing me and my friends around the winery and, interestingly, his specially-designed amphora for fermentation. Initially he had faced challenges to fire the clay to sufficiently high temperatures to rid it of impurities. But he’d persevered until he found a way to fire it at 1000 degrees C! That’s the single-minded Sadie vision, passion and tenacity that has got him to where he is today. 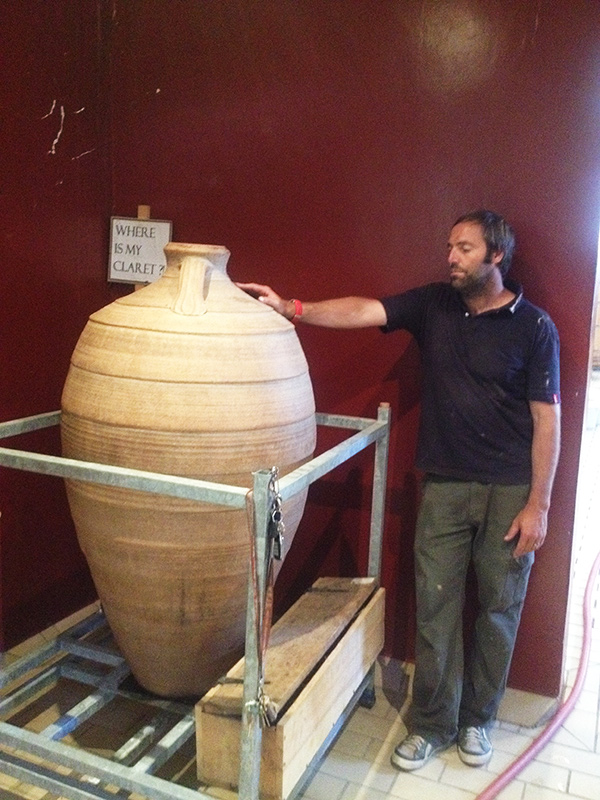 After our cellar tour, we headed upstairs to the very informal and (empty) bottle-lined office/tasting room, where he works alongside sister Delana and the rest of the team. I was with my two good friends, Andrea and Michael Jansen (who also be joined me last month at the Swartland Revolution.) Eben brought out some seriously expensive wine glasses and we started start tasting a few wines, first from his Old Vine series and then the flagship Columella and Palladius. At some stage, Eben broke one of the glasses. That literally broke the ice and the tasting took on a far more light-hearted tone from there.

Eben isn’t the kind of guy to take things too seriously. Sure, he’s absolutely passionate about his ongoing search for the Swartland region’s oldest bush vines and unique terroirs, and his wines have been described by some as ‘cerebral’. But this is a man who is equally at home riding a wave or playing air guitar (a tradition repeated with a group of fellow winemakers at the recent Swartland Revolution) as he is at a wine fair.

He travelled the world working in vineyards in Germany, Austria, Italy, Burgundy and Oregon before returning to South Africa in 1998 to work with Charles Back at the Spice Route and, a year later, he founded the Sadie Family label, with the first wines released in 2000. For a while he continued to split his time between his European and other local projects and the family farm, but in recent years he’s focussed solely on the latter, and Sadie now has about 50 vineyard parcels spread over 400km around Swartland.

He says he chose Swartland for several good reasons. While it’s not South Africa’s best known region (though he and his compatriots such as Adi Badenhorst are steadily changing that) it is in his opinion the area with the most interesting soils. They are poor soils with very little water (and 2015 has been their driest year in over half a century) or irrigation. The region also has the highest concetration of old vineyards in the country. It’s an area that can produce incredibly high quality fruit. “We wanted to just harness all this and bring it together,” he says. 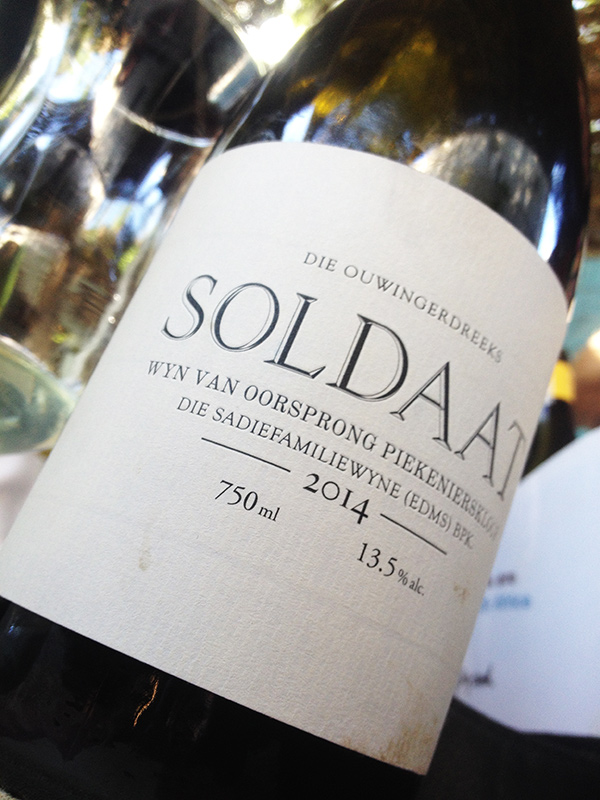 The wines Eben first developed were his signature ‘appellation’ wines – Columella, a red blend of five different soil types from around the region and Palladius, a similarly representative white blend. Fifteen years later these still remain the pure, true expressions of the Sadie Family Wines cellar, and are the wines that consistently attract international recognition. In fact the Palladius Swartland 2012 made Wine Spectator’s top 100 this year, earning 94 points.

But while these Sadie ambassadors are all about regional terroir, Eben’s more recent Old Vine series is conversely a line-up of small-production, single vineyard wines sourced from those dwindling old vines he’s so passionate about. “These vineyards are our wine industry’s treasure. We have to save them.”

That doesn’t mean he can’t have a bit of fun with naming them, and each label pays homage to Eben’s Afrikaans heritage and the region, with plenty of signature Sadie humour. Try wrapping your tongue around Skurfberg, Kokerboom, Treinspoor, Soldaat, Skerpioen and Pofadder.

With minimal production, the Old Vine wines are hard to locate, but critics say they represent some of the most compelling and diverse bottlings being made in South Africa today. So, we at Planet Wine are incredibly privileged to have been able to secure a small allocation of them in our first order.

Eben recently told influential wine writer Neal Martin in an interview for eRobertParker.com that, while the Old Vine series was about showing the good things in the past, Columella and Palladius were indeed Sadie’s ambassadors. “They have capsules and they are labeled differently. They have to deal with change. So we impart the new knowledge as the appellation develops. The future dynamic of the region is going to unfold and so the wines have to change. I almost change in decade modules. You need to read ten vintages to understand and have closure on things. When I was younger, there were too many changes that were too quick,” he said.

“Everything new is not always cool. It's not a case of just finding old vines, chuck the juice in the barrel and charge a lot of money. I talk to other people like Chris (fellow Swartland winemaker, of Mullineux & Leeu) and Rosa (Kruger, an old vine specialist who helped Eben source his plots) about it. I really question myself."

And what about Eben’s overall philosophy in winemaking. This is how he described it to the Terroirist Wine Blog: “Nothing should ever be added. No ego, nor any other element. All you need is the fruit you pick, and this fruit should be from sound, healthy and natural vineyards. The perfect grape is enough for wine.”

We’ll drink to that, with a bottle of Sadie Family wine of course. If you'd like to do the same, take advantage of these special introductory offers: