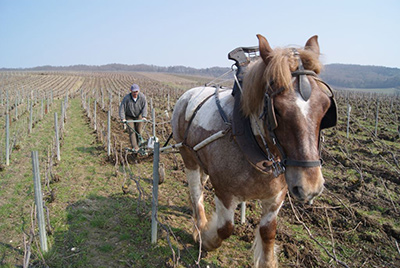 You would rarely expect to encounter draft horses at work on an established vineyard these days, even that of a 19 th century Champagne house. But innovative fifth generation winemaker Benoit Marguet has been ploughing his soil this way since 2010, and added two new animals, Titan and Urban, to the team this year.

It’s all part of his uncompromising commitment to biodynamic farming methods, which have seen the eight hectare Marguet estate Demeter certified since 2013.

‘The well-being of the soil is a priority,’ says Benoit. ‘The horse is in connection with the three elements of terroir – mineral (chalk), vegetal (vine and flora) and animal (fauna and human).’

He argues that by using this method of cultivation roots are forced deeper towards the water table surface, providing a better water supply.

The adherence to biodynamic principles also means spraying is kept to a minimum, and hardly any copper or sulphur is used. Instead, to aid the vines’ auto-immune defence systems, macerations, infusions and decoctions of stinging nettles, dandelion and camomile, to name just a few, are used alongside milk (yes, organic cow’s milk), juice of valerian and grapefruit seed propolis.

‘This work of symbiosis, with the principle of nature to help nature, is fascinating research work for me, with influences from various cultures and countries,’ says Benoit. ‘In my opinion these fundamental or elemental practices are solutions to get wine renowned for its full health benefits, and even more actually…’

Despite his family’s winemaking heritage stretching back to the 1870s, Benoit’s exploring tendencies saw him take on his first job as an assistant winemaker in North America’s Washington State, followed by a stint as a sommelier in Paris. Once back in the family fold, he became involved with the young progressive wing of the Groupe de Jenunes Vignerons in Champagne, and in a relatively short period of time gained a reputation as a talented winemaker and restless innovator. 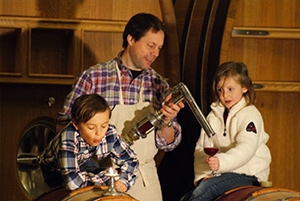 The house of Marguet is located in the famous village of Ambonnay, and its vineyards situated on the Côtes des Grands Noirs – the slopes of the great black grapes – in the Montagne de Reims, also including the villages of Bouzy and Mailly. Grapes that cannot be supplied from the family estates are bought in from like-minded careful vine growers in other highly esteemed villages such as Verzy, Mareuil sur Ay, Cumières and Rilly la Montagne.

The biodynamic principles continue in the cellar and wherever possible the wine is worked according to the lunar cycle. Research and innovation are rife too: With the belief that the shape of a vat can affect the quality of the wine, Benoit installed special 40hl egg-shaped wooden cuves in the winery. Produced to his specifications by tonnellerie Taransaud, the shape provides the height to width ratio of the Golden Mean or Phi. Benoit believes this relative proportionality that is a natural feature repeated throughout the physical world encourages spiral convection currents and a harmony that will better clarify the wine.

All this dedicated work looks to be going to pay off again for the new vintage. Benoit reports that spring 2015 is a joyful time for Champagne farmers. ‘So far it has been one of the driest for many decades, with a huge amount of sun and little heat, which is simply excellent.’

June is also the time for emptying Marguet’s 280 barrels of the 2014 harvest, which will allow a production of around 80,000 bottles. ‘I was a bit worried tasting in winter,’ says Benoit, ‘as the malolactic fermentations happened very early, in October instead of the usual March-April, and the rain we had in August made me fear some dilution. But not at all!’

‘It is bright and clean like the 2009 vintage, with no evolution showing despite no sulphur being used, but work with naturopathy techniques instead.’