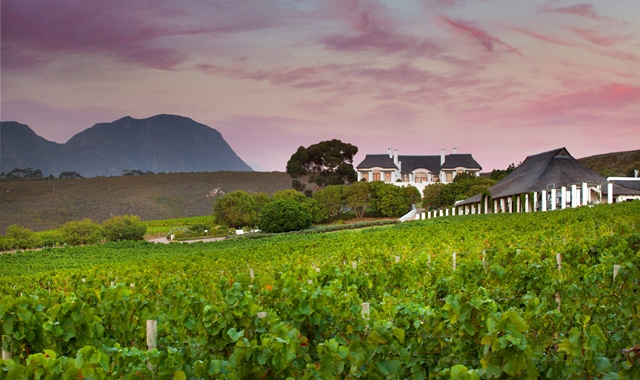 In New Zealand we have good reason to consider that we boast some of the Southern hemisphere’s top exponents of pinot noir. It may surprise you to learn that in a hidden valley on the South-East coast of South Africa, a country better known internationally for its fuller bodied reds, a handful of winemakers can lay equal claim to making some of the New World’s best expressions of the grape. And ‘father’ of these has to be Peter Finlayson of the renowned boutique wine estate Bouchard Finlayson. 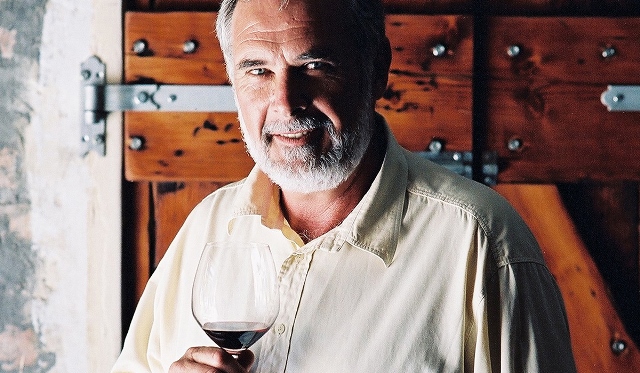 Peter’s first exploration into the picturesque Hemel-en-Aarde (literally Heaven and Earth) valley in Walker Bay, just an hour and a half from Cape Town on the way to the southernmost tip of Africa, was to set up the neighbouring Hamilton Russell estate, the first modern winery in the region. The success he made of that venture became legendary and during his eleven years as winemaker there he established an international reputation for excellence and put Walker Bay chardonnay and particularly pinot noir on the world map.

In 1989 he partnered with celebrated Burgundian winemaker Paul Bouchard to buy the adjoining 125 hectares of farmland, mostly given over at the time to mielies (corn), sheep and baboons. The first two have long been replaced by vines and native Fynbos, but I can attest to the fact that baboons are still a regular presence as I travel through the area.

As a university student in Cape Town, nearby Hermanus was a regular getaway destination with many happy memories. I regularly visited the wineries and, once I had commenced working in the wine industry, I started collecting wines from the region. The Grand Vin Noir from Hamilton Russell would have been one of the first forays into serious pinot noir in the early 1980s. Fast forward 20 years to New Zealand and a flourishing Planet Wine business; I was keen to round out my South African portfolio with a winery from this premier pinot noir region.

Framed by the imposing Galpin Peak and the Tower of Babel mountains and with breath-taking ocean views, Walker Bay is one of the coolest wine-making regions in the Cape. The cold Atlantic holds considerable influence over the climate, but the ground is kept frost-free thanks to the moisture and cloud cover blown in off the sea and trapped by the mountains. Which is why Peter recognised it from the start as the perfect growing environment for the illusive, slow-ripening pinot noir grape. 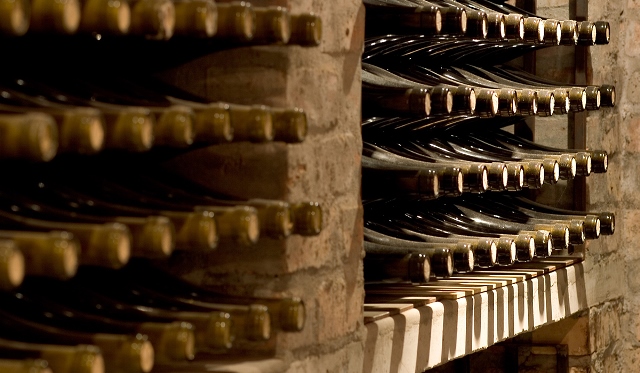 I first imported Bouchard Finlayson wines in 2009, but it wasn’t until 2013 that I was able to sit down at length with Peter over a wine tasting and establish a rapport and mutual wine understanding. He generously took me through some of his older vintages at that meeting, and I left with a few very special bottles under my arm.

The Bouchard Finlayson wines straddle New World and Old World in style, with more of a leaning towards restrained Burgundian than the many more fruit-driven New World styles. There’s a great texture and elegance to them.

Peter produces what is widely considered South Africa's finest pinot noir, the Tête De Cuvée, but it was the impact and the back story of the Hannibal – a sought-after blend of three French and three Italian red grape varieties – that grabbed my attention during our first meeting. 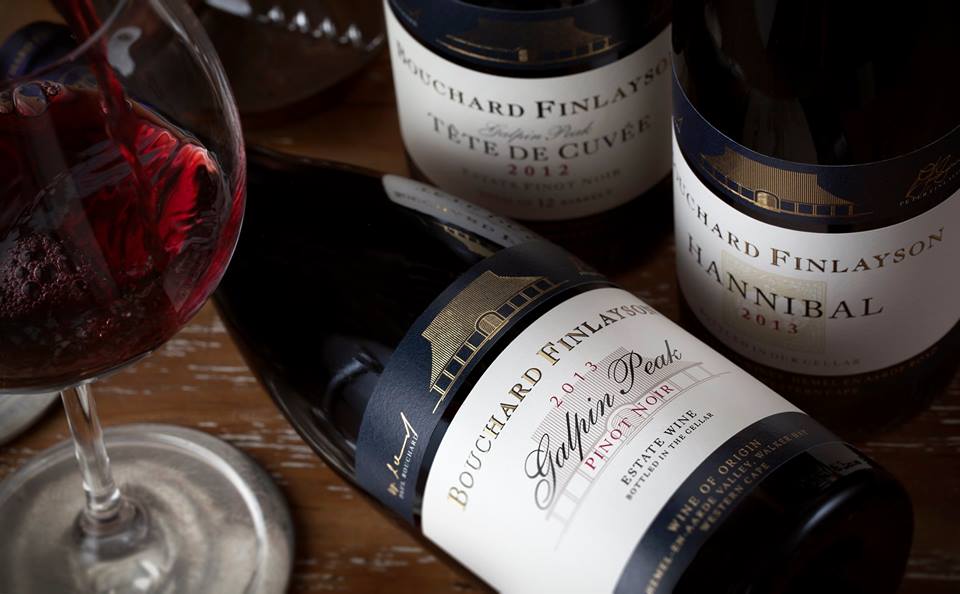 The name Hannibal is taken from the great military commander Hannibal Bacra of Carthage, who purportedly linked the winelands of France and Italy 2000 years ago when he marched an invading army (including 37 African elephants) from Iberia over the Pyrenees and the Alps into Italy. The label is a symbolic expression of the synergy between the three influences that shape this individualistic African blend of classic Italian and French varieties.

The birth of Hannibal began with Bouchard Finlayson’s importation of the first sangiovese and nebbiolo plant material into South Africa in 1989. After 12 years in development, the first bottled wine was released in 200l. Peter describes it as a “a symphony of flavours” and considers the 2013 vintage (a composition of 52% sangiovese, 17% pinot noir, 15% nebbiolo, 8% mourvedre, 6% shiraz and 2% barbera, which Planet Wine currently has in stock) as potentially one of the best productions. “Superbly smooth, with lots of leather ending in a harmonious creamy finish,” he says.

No surprise then that this innovative blend keeps winning awards on a global scale, from the Decanter World Wine Awards in London to the China Wine and Spirits Awards, and the Six Nations Wine Challenge in Australia. Back on home turf Hannibal continually receives the highest honours in the prestigious Platter’s South African Wine Guide and at the South African Wine Index (SAWi) Awards, where it has taken out the Top Red Blend (other) category for the past six years.

Not to be outdone, the trail-blazing Galpin Peak’s 2013 vintage was one of only two pinot noirs to receive 5 stars in the 2016 Platter’s Wine Guide. (In a salute to terroir, the honour was shared by fellow Hemel-en-Aarde winery Newton Johnson, whose wines we also import.) It took a gold medal in the 2016 Drinks Business Pinot Noir Masters and featured in the Independent Wine Merchant UK’s top 100 for 2016. And Galpin Peak has trumped the Top Pinot Noir category at the SAWi awards for six years running, in addition to achieving the highest score for a Noble Red produced in South Africa in this year’s competition.

Though more than half of the vines at Bouchard Finlayson are planted to pinot noir and the varieties that go into the Hannibal, it’s not solely about red wines at the estate, and white varieties include chardonnay, sauvignon blanc, chenin blanc and Riesling, with the Missionvale chardonnay our favourite. 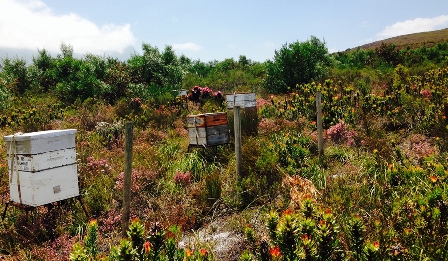 Only 22 of the 125 hectares are under vine, with the balance of the property left wild as a conservancy for the indigenous Fynbos – the smallest and richest floral kingdom in the world. Over 300 species have been identified there to date.

While the Bouchard name remains on the label, Paul is no longer involved in the estate, which since 2000 has been owned by the Tollman hotelier family. Victoria Tollman collaborates with Peter to run the business and assistant winemaker Chris Albrecht works alongside him in the winery.

Even after more than 40 years in the industry, Peter continues to show all the passion and exuberance that established him as the region’s pioneering winemaker. A passion that his sons Peter-Allan and Andrew have inherited, establishing their own Chrystallum brand, also in Walker Bay, in 2007. I met with Peter-Allen last year and discussions are under way to bring in his wines to New Zealand as well. Watch this space.