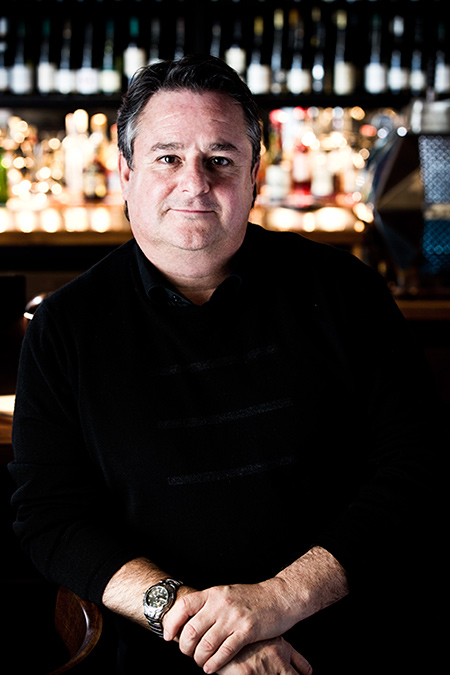 Acclaimed for its wine list as much as it is for its great food, O’Connell Street Bistro in the heart of Auckland city is one of Planet Wine’s longest standing customers. In the first of a regular column, we talk restaurants, wine lists and the joys of travel with owner Chris Upton.

When British-trained Chris arrived in New Zealand in 1987 with just his backpack after a number of years working the cruise ship circuit, he knew almost immediately he’d found home. Not too long after that, he met the reason he’d be here for keeps – his partner of the past 24 years, Amanda.

The couple met while working at the Auckland Park Royal and after a stint at Puka Park Resort in Pauanui, they went into their first venture together, a small café in Vulcan Lane they named Café Melba. Two years later Chris spotted the O’Connell Street site just around the corner and decided it was perfect for the modern European-style bistro they had in mind. “Somewhere that takes inspiration from lots of different places, but utilises New Zealand’s best produce,” he describes their aim.

The bistro was a pretty new concept to Auckland back then; it was a term usually associated with the dining rooms of pubs. O’Connell Street Bistro started with just nine uncovered wooden tables and a small bar. But it wasn’t long before they added white tablecloths and knocked through a wall to add another three metres to the restaurant. Now they also have the adjoining site on the corner of Shortland Street that is used as a private dining room and, with the recent pedestrianising of O’Connell Street, they’ll offer several outside tables come summer.

Getting a restaurant off the ground in those days, without the benefits of social media, was a very different challenge, and it took them at least six months to build a profile. “And then we had our first review in the New Zealand Herald, by Sarah Kate Lynch (still a regular), who said something like ‘I’ve got to tell people about this place’, and she did, and they came,” laughs Chris.

It’s testament to Chris’ approach that there’s been little turnover of head chefs in their 18 years. Sean Armstrong was at the helm for some time and Stephen Ward ran the kitchens for 12 years. At the end of September Mark Sutherland, previously of Viaduct’s Foodstore, steps into the role. But even when the chefs change, some menu standards, like the famed steak tartare that Chris first learnt to make at age 16, never do.

“Consistency is my key. People know what to expect when they come to O’Connell Street Bistro and that’s important, particularly to our corporate customers.”

That consistency holds for his suppliers as well. “We’ve been working with the same lamb supplier and his same cut of meat for the past 15 years,” says Chris.
When it comes to wine, not only is the restaurant’s list considered ‘legendary’ amongst local critics, it has received an Award of Excellence from New York’s prestigious Wine Spectator magazine no less than 15 times.

Chris says a successful wine list should represent both the establishment and the cuisine. “So, with a bistro, for starters that means plenty of classic chardonnays and Bordeaux blends.”

Regionality is also key, and these days even sub-regions – he points to all the different areas within Central Otago as an example. (Though in terms of pinot noir, for Chris personally, and for his bistro-style food, the more earthy Martinborough wines will always win out. “I prefer a bit of dirtiness in a wine”, he says.)

Stories are important too. “When you’re telling a customer about the particular farm on the banks of Lake Dunstan near Bendigo that the wild hare in the pappardelle comes from, you want to be able to do the same with the accompanying wine.”

That ability to seek out wines that have a strong back story is something he particularly appreciates about Martin and Planet Wine. When we note that the wine list already boasts several offerings from Bodegas Godelia (situated along the Camino de Santiago in the mountainous El Bierzo region of Spain) only days after Planet Wine’s first shipment has arrived in New Zealand, Chris explains: “Martin brought the winemaker in on her visit to Auckland. We really liked the youthfulness of the wines and the story behind the vineyard. And they’ve done well!”

Even if a wine Martin presents doesn’t fit the bistro’s current offering, it will often appeal to Chris’ own palate. “There’ll be times when I’ll say that’s not for our wine list, but send a case to my home address please!”

Both avid explorers, the two have exchanged a lot of useful travel tips over the years. As a result of introductions from Martin, Chris and Amanda have enjoyed wonderful interactions in Italy with the owners of Anselmi winery in Veneto and with Riseccoli in Tuscany. In turn, Chris gave Martin several good leads for his current European buying trip, including a traditional port producer in Portugal now making refreshing white wines.

It’s not only vineyards Chris and Amanda seek out when they are abroad. They see their travels as inspiration for developing their menus. The bistro’s Tahitian vanilla crème brûlée features the beans from a farm they discovered on the small island of Taha’a off Bora Bora during a holiday and have been importing directly ever since.

We’d hazard a guess it’s these kind of personal elements that have kept their regulars coming back week after week for the past 18 years.