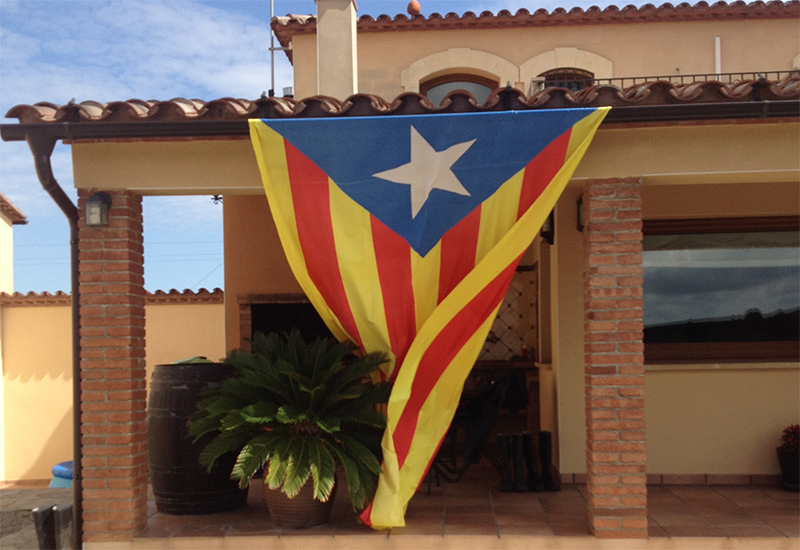 It’s an easy drive out of the city but as the famous Sagrada Familia’s spires and the hordes of tourists fade into the distance, I feel as if I am stepping back into another era. El Penedès may be one of the country’s most important viticultural areas (mainly due to the massive production of Cava, Spain’s methode champenoise) but unlike visiting Rioja, where I am aware of being on well-travelled roads, here I get the impression I am exploring a region little known to tourists. There’s an authenticity to the place and the people and the welcome is always warm.

No more so than at Mas Candi, situated in the altitude-cooled hills of the Alt Penedès just below the ruggedly quaint village of Les Gunyoles in Avinyonet. Despite the fact that I am arriving slap-bang in the middle of harvest, I’m greeted with a huge bearded smile and a firm handshake by Ramón and a sincere hug and the traditional two-cheeked kiss from his wife Mercé. 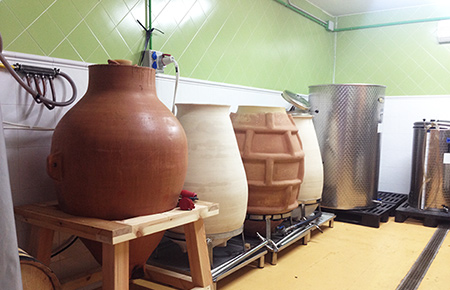 I watch Ramón and his small team manhandle full bins into the chilling container. Now we can taste some must from the tanks and Ramón and Mercé proudly show me their clay amphora – newly-reborn ancient fermenting vessels. They have four different shapes that are crafted from four different types of clay, fired at different temperatures. These are early trials but having tasted other wines made in concrete eggs and amphora, I can only endorse their adventurous move. Mercé gifts me an un-labeled bottle of La Pura 2014, a single-vineyard xarel.lo fermented in amphora – only 270 bottles made. Will it make it to NZ I wonder ...? 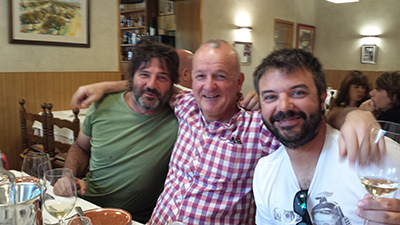 This is my second visit to Mas Candi. On my first in 2010, after a vineyard tour, we enjoyed a very long lunch at nearby U restaurant (the effects of which are telling: https://vimeo.com/11080169). Despite the pressures of a challenging 2015 harvest brought on by a hot year and all the grapes ripening at once, the couple takes time off again to repeat the event, this time at Cal Xim. We take nine bottles of wine with us to taste. (Do they know what is going to hit them?) At lunch I find myself sandwiched between two hairy winemakers – one ‘organic’ (Ramón) and the other (business partner Toni) ‘natural’. We can only grasp snippets of each other’s conversation, but we communicate well enough, and there’s laughter around the table. Mercé and Ana (Toni’s wife) and my long-time friend, winemaker Pamela Geddes, do what translating is required.

Ramón, Mercé and Toni (along with another friend, who has since left the group) launched Mas Candi in 2006 after they had all completed their viticulture and oenology studies and gained some experience in Burgundy. Not only did they decide to return to their Catalonian roots, but they agreed to pool their pockets of ancestral land – some pieces of which the families had been cultivating since the sixteenth century. The partnership is a loose arrangement, cemented simply on that firm Catalan handshake.

The trio inherited some very old vines and native varietals and, instead of digging them up to plant grapes that may have more international appeal, they preserved them. In fact, they’ve gone further than that, even working to re-introduce more historic ones such as mandó, monica, sumol and cannonau, some of which haven’t been harvested in the area since the 1800s.

Mercé tells me that cannonau is a mutation of the original garnacha taken to Sardinia by Catalan colonists. The Mas Candi crew headed to that island to bring back some cuttings. The monica was also sourced in Sardinia and their mandó comes from a vineyard near Girona.

It’s their dedication to another more established autochthonous varietal, xarel.lo, that has made an impact in their export markets (they send about 20% of their annual 35,000 bottle production offshore to the US, UK, Japan, Belgium and, of course, New Zealand). Customers like us note that their wines have a personality and authenticity that derives from those native grapes off old vines.

It is common sense to the Mas Candi team to nurture older vines. “We were convinced that if we continued cultivating xarel-lo like our grandparents, the result would be wines of exceptional quality,” explains Ramón. “The oldest vineyards are more balanced and resistant to disease and the vagaries of weather.”

The three wise Mas Candi partners have chosen to be organic wine farmers and are currently in conversion to biodynamic status. That means no chemical fertilizers, antifungal treatments or pesticides. Grass is left to grow long between the vines (‘mowed’ by sheep when necessary) and, along with leaves that stay where they’ve fallen and some additional vegetal waste, creates a natural compost. This eco-friendly treatment in turn reduces diseases, helping the vines to be healthier and results in smaller grapes with more concentrated aromas.

Mas Candi gives a whole new meaning to hand-crafted: draft horses plough the soil and harvesting is done by hand.

Most of the land is given over to xarel.lo, a lively white grape that is perfectly adapted to the soil and the climate, which is no surprise since it’s been cultivated in the region since 1785. Its old vines have deep roots that help the grapes obtain strong mineral characteristics from the soil, producing a complex wine.

The estate’s premier wine, QX Quatre Xarel.los is a mono-varietal originating from 54 to 60 year old vines. The QX (or 4X) expresses the fact that the grapes are picked from four of the estate’s vineyards and aged in four types of barrels (French and American oak, Chestnut and Acacia, the last two being supplied by a neighbour). It was rated as one of the region’s three best white wines by the 2011 Catalan Wine Guide.

I am taken by some of their new wines and will be adding these to the offering in NZ. One first for me was a sparkling wine made in the ‘ancient’ method. In this instance that means starting the fermentation in tank and, at a certain density, filling the wine into bottles capped with crown seals, as you would in the champagne-making process. The remaining sugar ferments away into alcohol and CO2, creating an excellent sparkling wine with a fine mousse.

You can explore our current offerings of Mas Candi wines, and take advantage of our newsletter special, here: