Ron Mulata – the best of Cuba in a bottle

Just as the ‘Cuban Thaw’ sees the welcome signs go up for the anticipated flood of American first-time visitors into the Caribbean nation, so a very Cuban export is heading the other way in growing numbers. Rum, or ron as it’s known to Cubanos, conjures up the island every bit as much as cigars and samba do, and we’ve got the best of it right here for you.

Ron Mulata is one of the most popular drinks in its home country, and that’s saying something, because Cubanos know about their rum. They should, they’ve been making it (officially) since Carlos V issued a royal order in 1539 formalising its production, and securing Cuban rum’s place on the world map.

Mulata (aptly named after the mixed race inhabitants that make up a quarter of the island’s population and are a manifestation of its tenacity and diversity) is relatively young as a company, formed in 1993. But its pedigree is the best, run as it is by the government-owned Tecnoazucar, which supplies 90% of the alcohol that goes into producing all Cuban rums.

Production takes place in the fifty year old distillery of Heriberto Duquesne, which is located at Villa Clara, in the central region of the country. I drove the four bumpy hours from Havana to visit the distillery in 2012, with the Business Development Manager, Antoine Mejias. On the way we stopped for a bite of local food – sort of like a fish burger – washed down with fresh sugar cane juice from a roadside vendor. In the local currency (rather than the CUC) the meal cost around 25c. 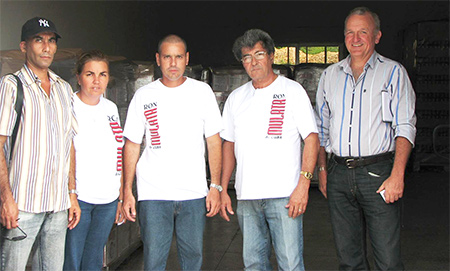 Our arrival at the premises was not very auspicious – a large battered gate was manhandled open to let us in. This is not a beautifully manicured boutique first world distillery. Here the focus is on the product. While the fermentation tanks are a relic from a long time ago, the distilling and bottling areas are spotless and all the staff proudly wear their Mulata t-shirts.

The distillery is the main employer in the region and it’s the pride of all the locals. After a tour, I was invited to invite the management team to lunch (things work differently in Cuba.) We gave someone a lift home from there and were welcomed into his home, which was a great honour to him. While we were in the area we also visited the Cuban rum museum and the huge Ron Mulata ageing warehouse. Thousands of American oak barrels filled with Cuban rum (commerce transcends!) waiting for its day in the sun. 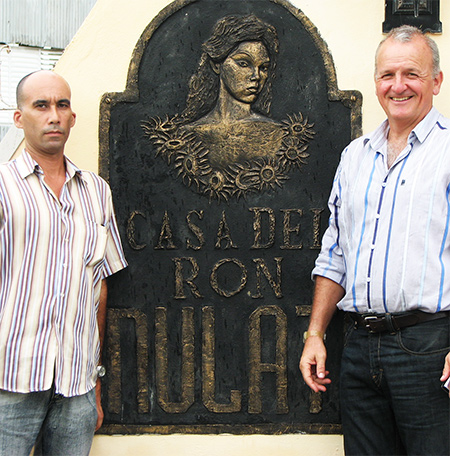 The skills of the maestro roneros (master distillers) at Heriberto Duquesne have been passed down through many generations. They use acquavite derived from the best Cuban sugar cane syrup and that, plus the process of maturing their rum in those 180 litre American oak barrels, is what gives Mulata its unique bouquet and superior flavour. The authenticity of the production processes here, and the high grade of the raw materials used, means Mulata is one of the very few that can style itself with the original denomination Ron.

The bottle’s label pays homage to Ochum, the female Orisha or spirit of the Yoruba religion, who evolved from Our Lady of Charity, patron saint of Cuba. According to local mythology, her spirit outwardly is a harmony of sensuality, gentleness and matrimony. Inwardly, legend goes, she has a hot temper. A bit like rum then, I reckon.

Ron Mulata comes in a range of quality rums – from the Silver Dry, a white rum ideal for Cuba Libre or Mojito, to the 5 year old aged golden Palma Superior (best with lime, on the rocks), the 7 year old dark Gran Reserva (good for mixing, and on its own), to the superb 15 year old aged Mulata Anejo Reserva, perfect to sip and savour with a Cuban cigar, of course. At the end of my trip to the distillery, Antoine gifted a 500ml unlabelled bottle of the 15 year old rum to me (the product was still in development then). It became my nightly sundowner in Havana.

And then there’s the uniquely Cuban 34% Elixir de Ron Liqueur. Sweet and succulent, but with great balance and a rich smooth flavour, it’s like Agavero is to tequila. Something really different, but so well worth trying, trust me.

Check out our range here Ron Mulata de Cuba, and whichever rum you choose for yourself, close your eyes and dream of palm tree lined streets, colourful Latin architecture, 50s American vehicles and the beat of hot samba music – and enjoy!