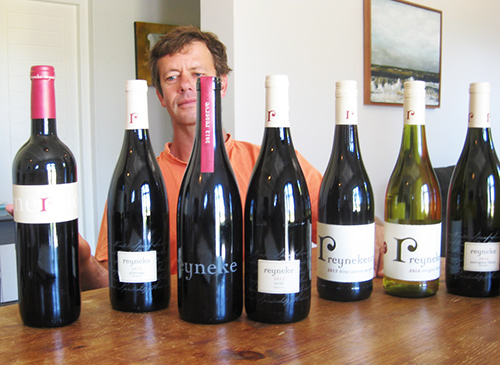 Jancis Robinson rates her visit to Reyneke as one of the most memorable of her 2014 South African trip. It must have left a good impression, because she’s just announced their 2013 Biodynamic Syrah as her wine of the week, a real benchmark for punters around the world.

Reyneke was the first producer in South Africa to get their biodynamic certification, in 2004. The rest of us may see that as advancement, but for them, it was all about going back to the beginning.

You see, when the Stellenbosch farm first began as Uitzicht (which means view in Dutch) in 1863 there were no chemicals or technological advancements – just the land and nature. These days the best of that land (about 30 of the 37 ha) is planted to vines and livestock and pockets of wilderness are given free reign of the rest.

When Robinson visited, she clearly got the impression of the surf-loving Johan Reyneke as a bit of a ‘hippy’, fully embracing self-sufficiency, even growing wheat for his own bread. After finishing school he studied philosophy. “I had dreadlocks then so it was difficult to get a job,” he told Robinson.

When I visited Johan in Stellenbosch in early 2015 I arrived with a similar notion, having watched YouTube videos of him surfing and talking. He greeted us with a big smile on his face, friendly dog in tow, wearing shorts, t-shirt and sandals.The man’s love for the land spills over to all of God’s creatures, and that includes us humans. We tasted the whole range of his wines and he loaded me up with samples to enjoy with friends the following week at Paternoster on the West Coast of Southern Africa. We don’t import all of his wines but fell in love with the syrah, chenin blanc, organic shiraz/cabernet and his exclusive Reyneke Red. Johan Reyneke has heart and his wines tell that story.

Being self-sufficient isn’t just a philosophical standpoint for him. As far as he is concerned, a biodynamic farm needs to be that way for two reasons: to reduce the carbon footprint yes, but also to be less affected by market forces. 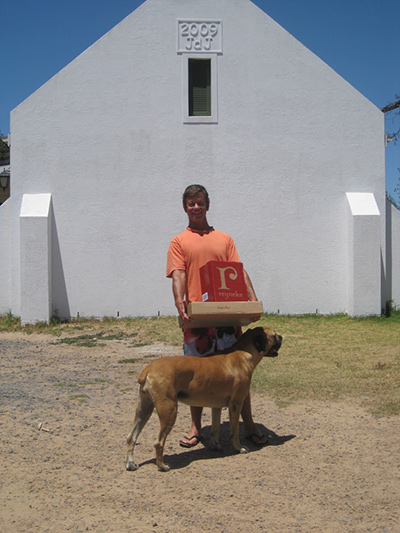 "If the farm can produce its own fertilizer and compost, this will mean it’s less dependent on trucking in fertilizer in clouds of diesel exhausts. If the farm is self-sufficient, its own cow manure ‘costs’ the same every day, irrespective of the price of oil."

Solid economic reasoning too, then.

We could go on about Reyneke’s exemplary biodynamic efforts – it’s partly what attracted Planet Wine to represent them in the first place – but for now let’s get back to that syrah that’s just highlighted their achievements on the international stage.

Robinson says she was impressed by the entire Reyneke range she tasted at the estate on her visit, but it was the Reyneke Biodynamic Syrah 2013 from the Polkadraai Hill on the outskirts of Stellenbosch she was especially enthusiastic about “for its interest, charm and obvious integrity”.

“I enjoyed the intensity of the red-fruit flavours and the ambitious structure and persistence,” she said. “I think it will be even better and more interesting next year and should last into the next decade, but overall it already tastes round and velvety.”

She gave the syrah what she says for her is a “massive” 17 out of 20. You can read her full story on the wine and the winery here: http://www.jancisrobinson.com/articles/reyneke-biodynamic-syrah-2013-stellenbosch

And you can explore our full range of Reyneke wines here: Reyneke Wines, Stellenbosch