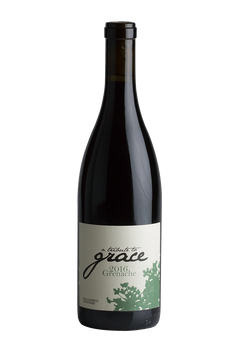 A Tribute to Grace Vie Caprice 2015

Another new addition to the grace canon, this teensy 1.94 acre vineyard is situated just off Refugio Road, in Santa Ynez. Planted in 2007 entirely to Alban clone Grenache, the property serves as a magical haven to friends Leif & Kimmy Hertzog, and Whit Latimer. 87 gently sloping rows canvas the classic Santa Ynez fine sandy loam, and encourage many layers of expression to shine. We started working with this fruit in 2014 when our friend Erik Mallea took over the farming (his day-job is vineyard manager at Sanford). Our block is now organically farmed, and we produce this single vineyard bottling as well as the Santa Barbara County blend (from the southern block of the vineyard, farmed to a slightly higher yield). Harvested in September, we received 3.8 tons. I foot tread twice a day throughout the 15 day fermentation, and whole cluster inclusion was 50%.

Pressed to barrel, MLF occurred spontaneously over the winter of 2014. The wine was racked once under the first new moon of 2016.