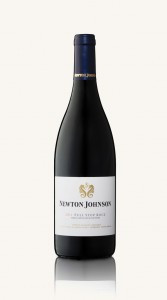 BACKGROUND
The lower slopes of the Newton Johnson farm are undeniably suited to Rhône/Mediterranean grape varieties. Alluvial deposits of large stone fragments up to two metres deep require vigorous growing vines to search for nutrients and water. ‘FULL STOP ROCK’ is how we define this jagged landscape.
Unlike pinot noir that is sapped of its plump fruit and vitality, robust vines like syrah, grenache, and mourvèdre, thrive in this type of soil. When we pioneered the syrah grape in the Hemel-en-Aarde Valley little was known of the potential styles of Syrah-based blends from the cooler South African wine areas. We were encouraged to discover clear-cut, invigorating wines with compact black fruit, spice, perfume, and sophisticated tannins.

TASTING NOTES
Brooding black fruits and liquorice dominate the nose, laced with black and white pepper, and sweet floral notes appearing after some time. Full liquorice flavour, with juicy red fruits in the periphery, and chewy tannins lasting in to the finish.

LOCATION & CLIMATE
The main vineyard contingent for this wine lies mostly on the lowest slopes and bottom plateau, at altitudes of 225 to 245m, in the porphyritic granite soils of the Upper Hemel-en-Aarde Valley. This appellation ranges from 4 to 8 km from the Atlantic Ocean. The climate is cool and temperate, where parallel mountain ranges channel the southerly ocean-going winds through the appellation during the summer. These southerly winds in turn create regular sea mists and overcast conditions, moderating the temperatures in the valley. Weather data from 2011-2015 conveys an average of 2620 growing degree days on the Winkler Scale, placing it in Region II. Cooler vintages (such as ’13 & ’14) deviate into Region I. The annual rainfall is 910mm, with 50% falling in the winter months (May – August).

2015 VINTAGE
Growing Season & Harvesting
A good, cold start to the winter with a mass of rain that ebbed away from July onwards. The middle of August saw a sustained warm spell that woke the vines in to budbreak 2 weeks early. The rains dried up by the end of October with practically no disease pressure all the way through to harvest. The dry season kept the vines’ vigour in check with a modest crop and fruit concentrated with flavour. There were stronger diurnal extremes than usual and fresh, cool mornings lasted longer into the day. The fruit across the board was markedly healthy and in some of the best condition we have seen. The syrah was harvested on the 2nd of March and the grenache and mourvèdre were harvested on 10 March 2015.

Winemaking
The grapes are hand-picked and packed in to large-surface area crates to limit pressure on bunches. The day’s harvest is cooled down overnight to 8ºC in the winery’s refrigerated cold room. The bunches are sorted on a conveyor, destemmed, and fall directly to the fermenter. All parcels are fermented with a discretionary percentage of whole bunches together with their stems. Cold maceration ensues for 3 to 6 days at 8 to 10°C. All parcels are fermented with indigenous yeasts, and only pigeage (punching down) applied for extraction. The wine spends approximately 25 days on the skins before pressing. After pressing the wine is racked and left to complete its malolactic ‘fermentation’ and maturation in oak barrels.

Maturation
Matured for 12 months in 228l and 500l barrels produced in Burgundy and custom made for the various vineyards. Tighter-grained oak is preferred for subtle flavour, with longer seasoning and slower, lower temperature toasting. New oak comprises 10%. The wine is racked to stainless steel tanks for another 6 months of élevage. No fining and filtration before bottling.